The video capture from my C128Dcr's 80 Column mode is franky glorious!

Rather a long time ago, I purchased a couple of CGA2RGB adaptors.Many years later when I came around to using them, I found out they are intended for use with the GBS-8200 (Lesson number one, always read the item discription!).. So off I popped to Amazon, as soon as it arrived I wired it up and hey presto, it didn't work.

I posted a Grumble on the twitters saying 'This is going in the bin'.. 50% of the internet agreed, but the other 50% said 'you need to mod that' and provided some links:D. 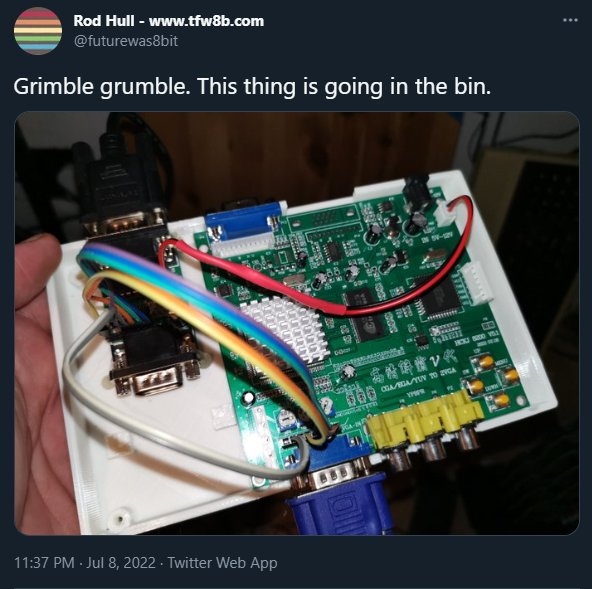 And as it turns out 24 hours later I did indeed have a usable RGBi conversion. Thanks Twitter, Thwitter.

Special Note: It's not a perfect consumer product. I have had the odd glitch. But I've only used it for a couple of hours so far.. expect many more C128D 80col capture goodness on my YouTubes in the Future(TM)

Obviously, you'll find videos all over YouTube on how to mod a GBS-8200.. But personally, I found them a little hard to follow. Pausing video is a pain in the bum! So here's my 'I've tried to slim this down to as few pics as possible mod' Watch me fail! ;D

Stage One: Programming the ESP 8266

To program the ESP 8266, you'll need Arduino IDE, an driver, GBS-CONTROL and a few libraries.

Right, you've downloaded all that stuff, this is how you should install / unpack it.

Install Arduino and then unpack GBS-CONTROL-MASTER into it's data folder c:\Users\xxx\Documents\Arduino\ - Be sure to rename the folder GBS-CONTROL

Once you've done all that, pop over to Rama's GIT and follow the software setup. https://github.com/ramapcsx2/gbs-control/wiki/Software-Setup 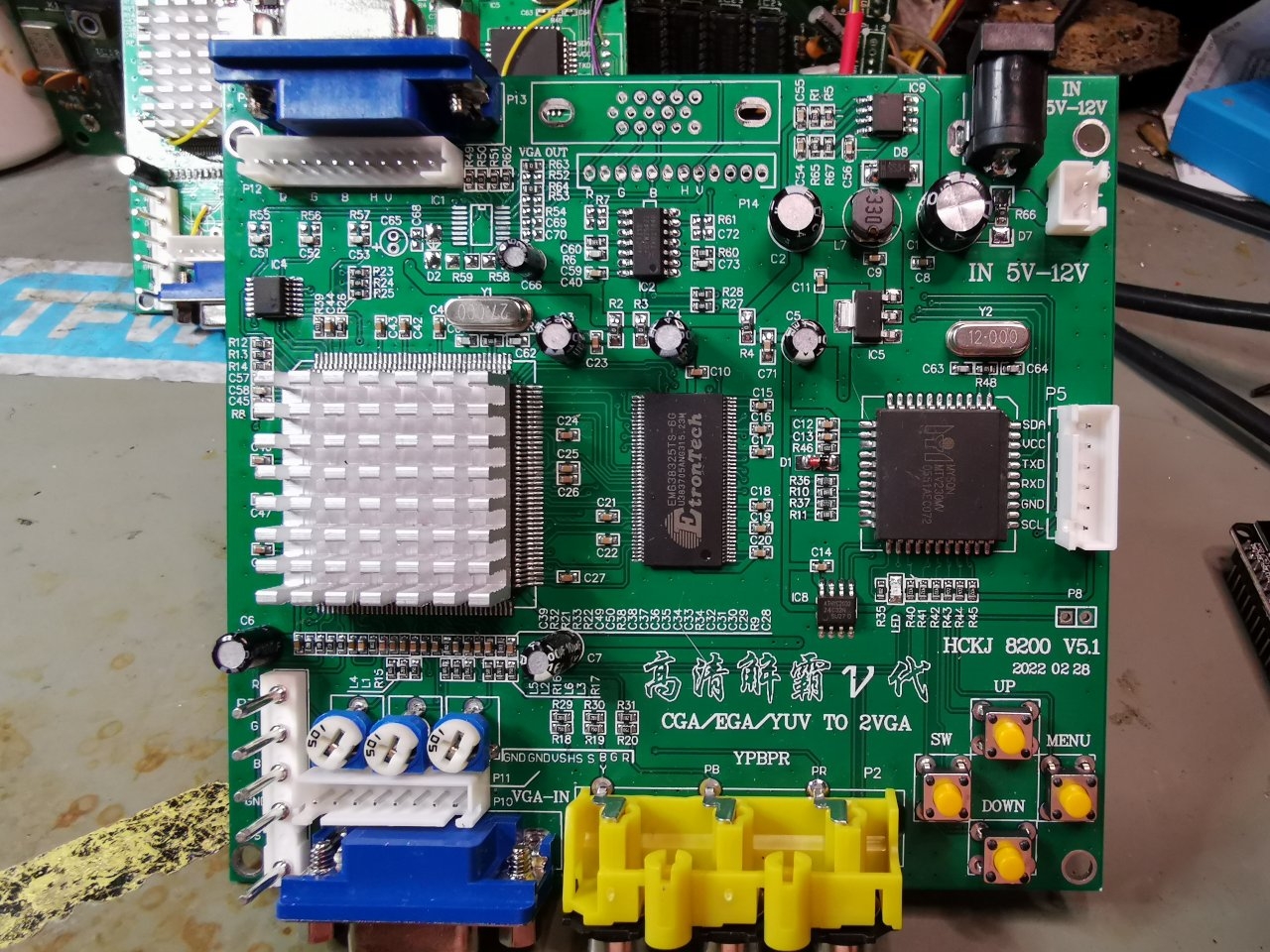 Above you'll find the unadulterated GBS-8200 PCB. This is one of the later variants with the single data connector on the left. AFAIK, they all work the same. If you're not sure, buy something off the shelf and save some swearing ;D 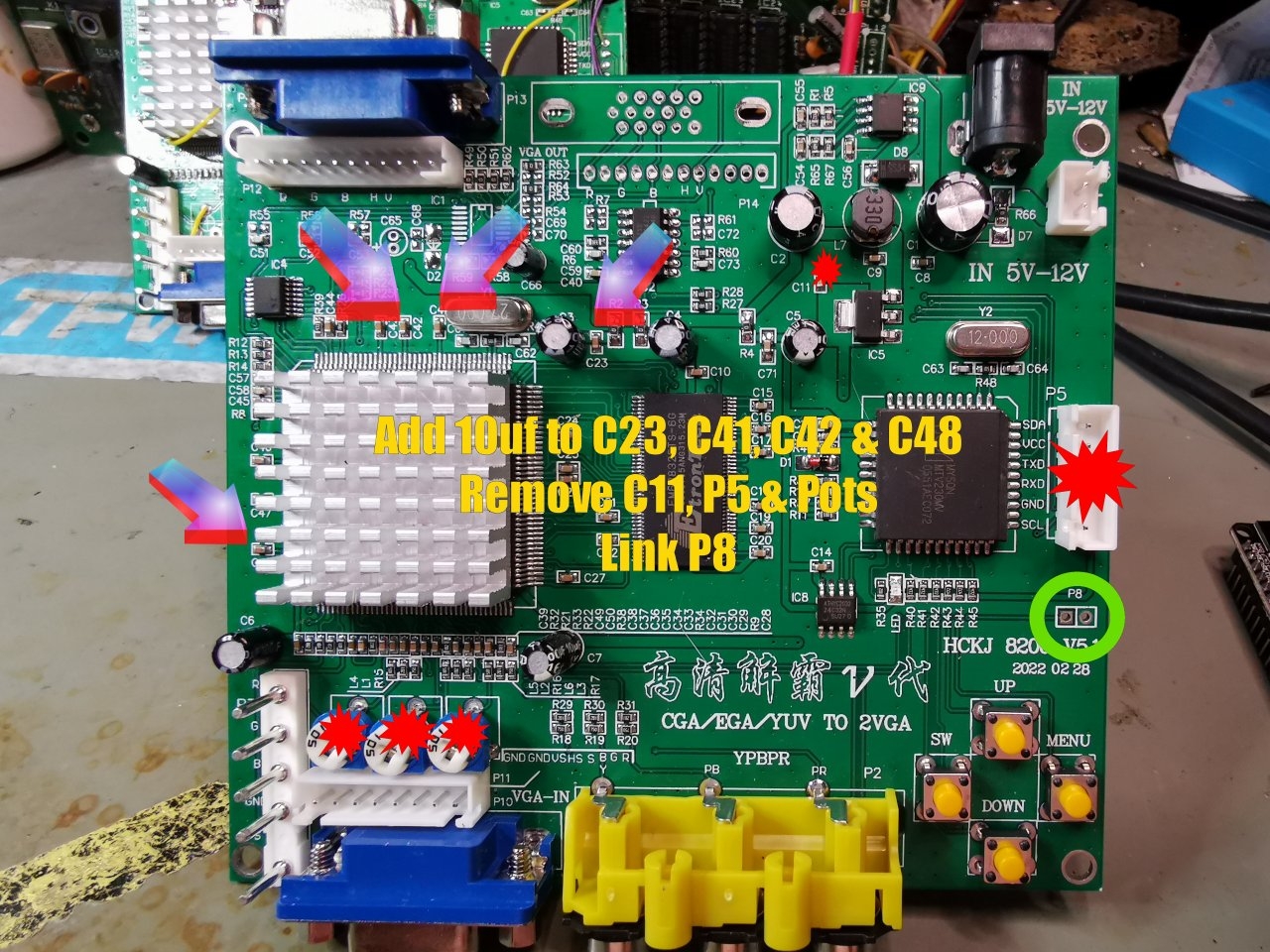 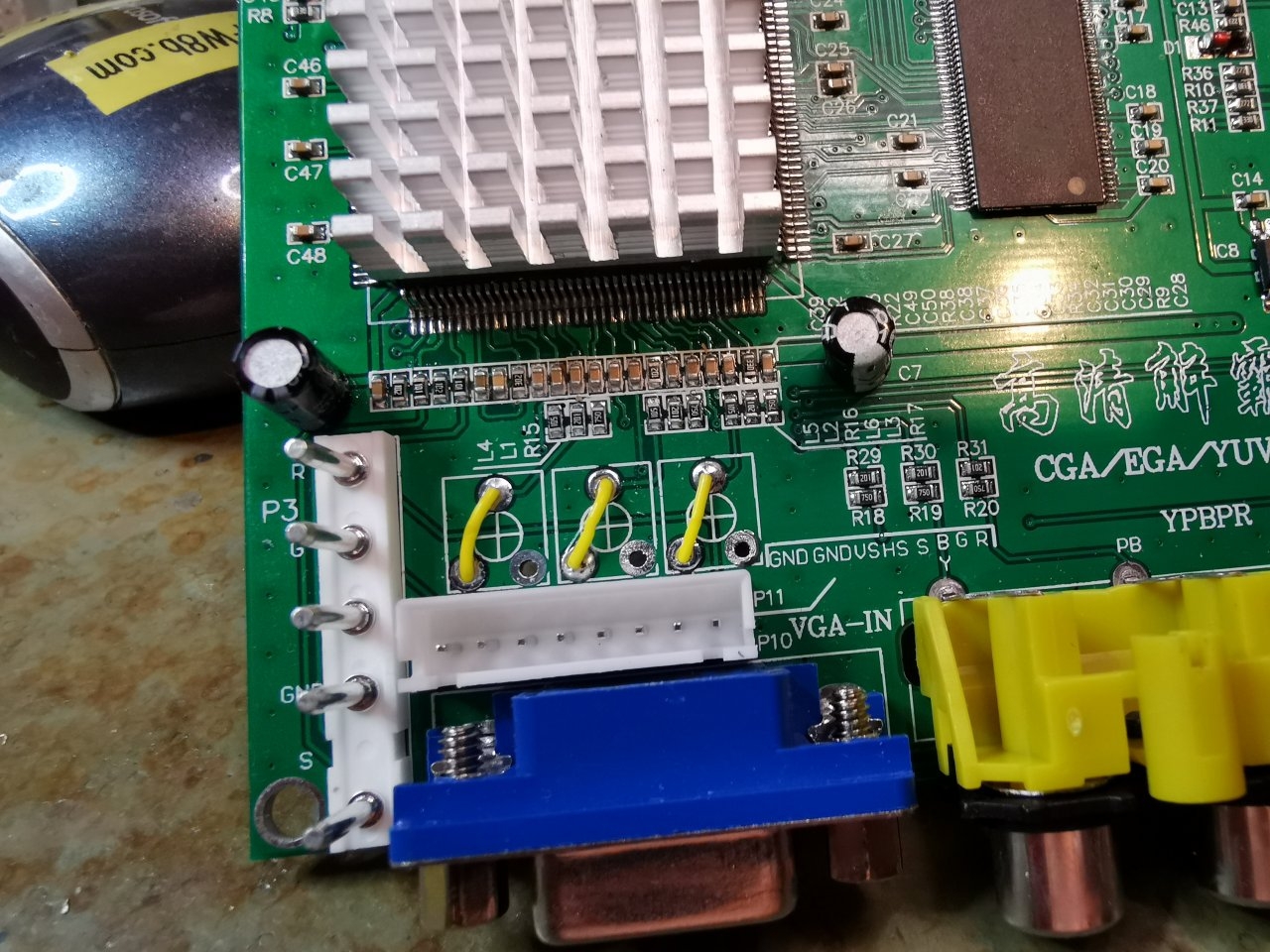 Next, install wire links where the pots used to live 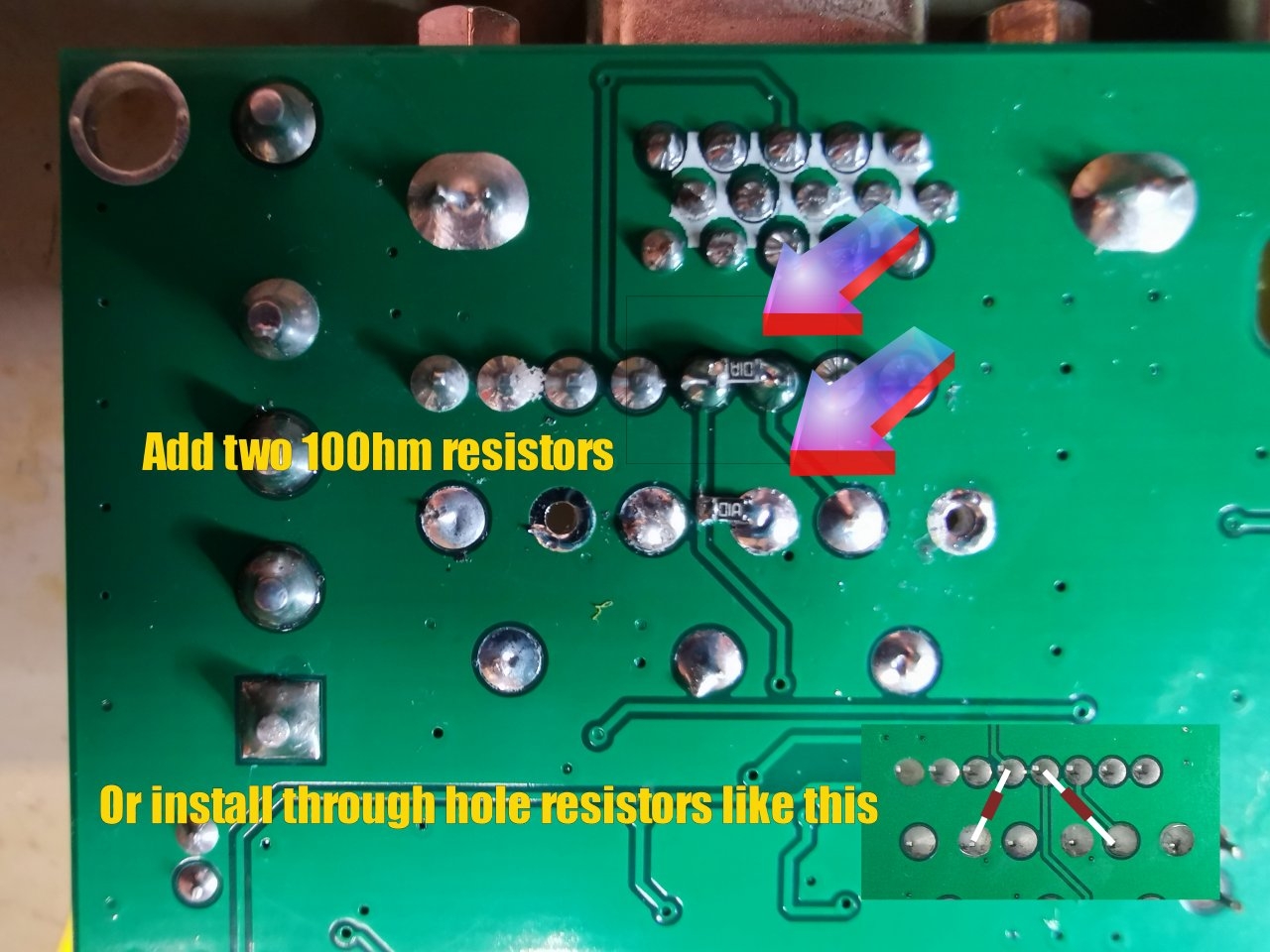 Flip the PCB over and install two 100ohm resisters. The surface mount install is tricky and you'll need to scrap away some of the insulator. I'd recommend using through-hole resistors if you have them (I didn't). Install them as shown in the lower part of the image. 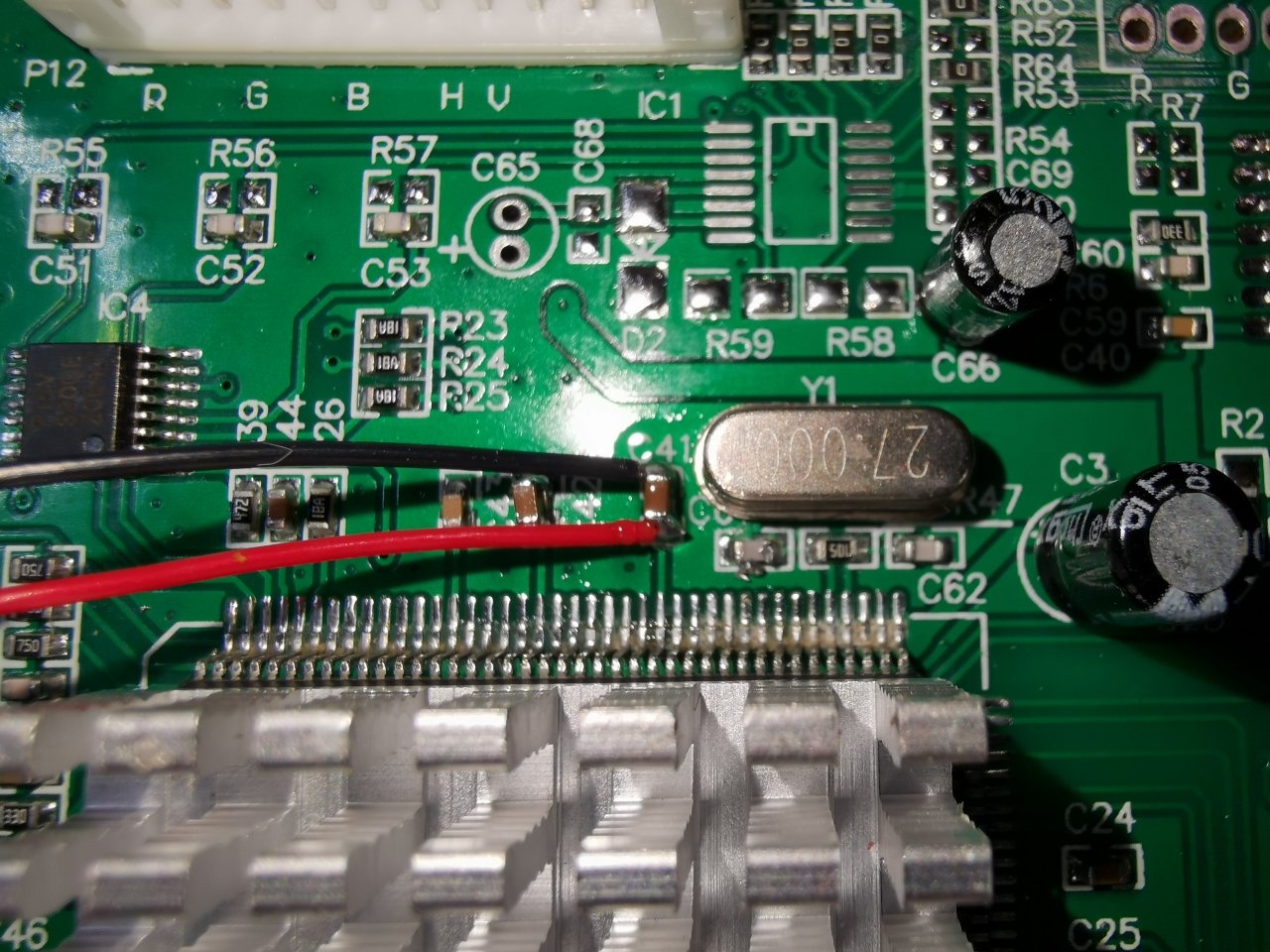 Right, lets get the clock PCB installed. Pick up it's power from C41 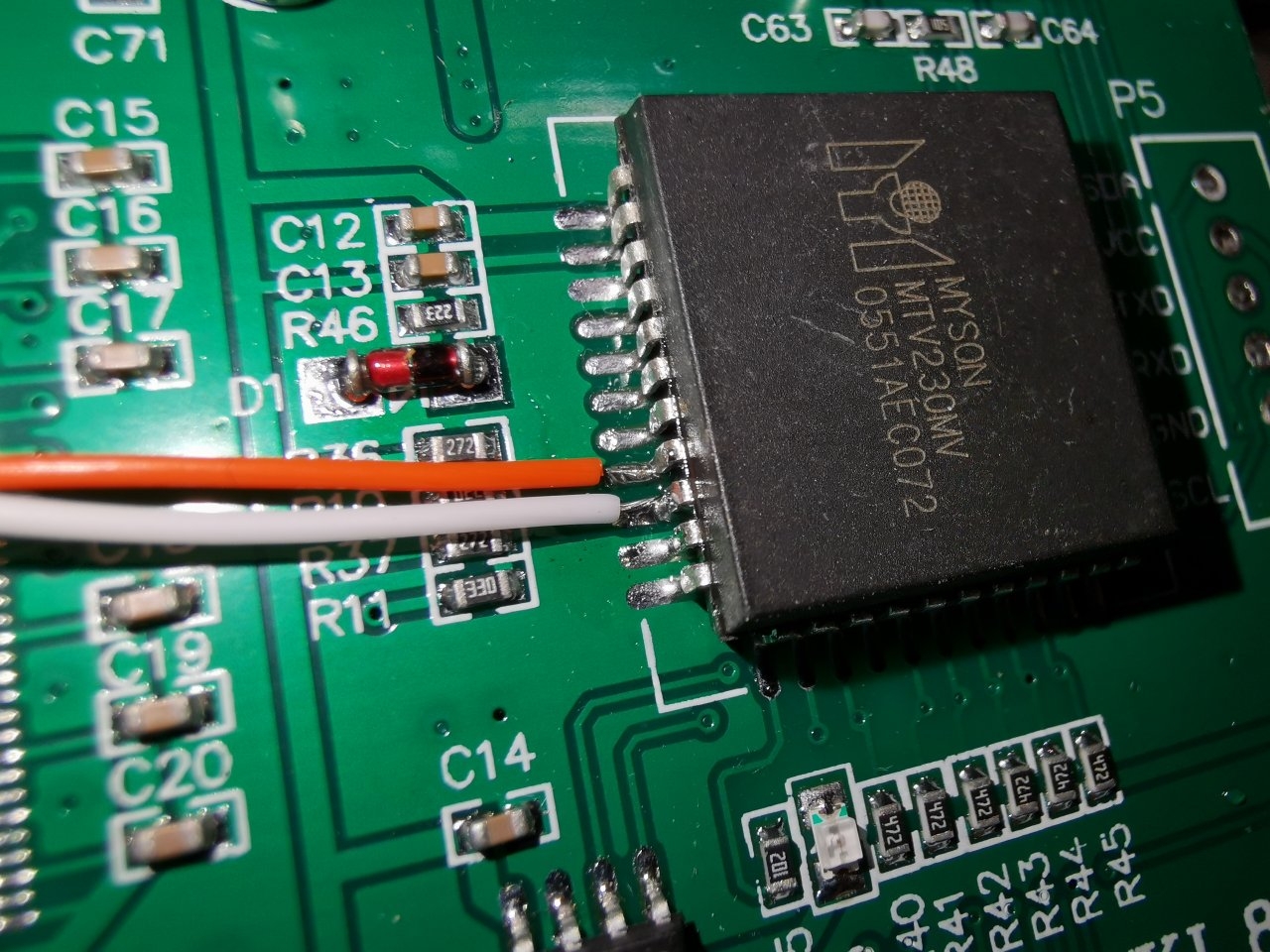 The clock PCB control output connects here. #TOPTIP. Tin the wires, and apply a tiny bit of flux to the chip. It should then easily attach without 'new' solder. 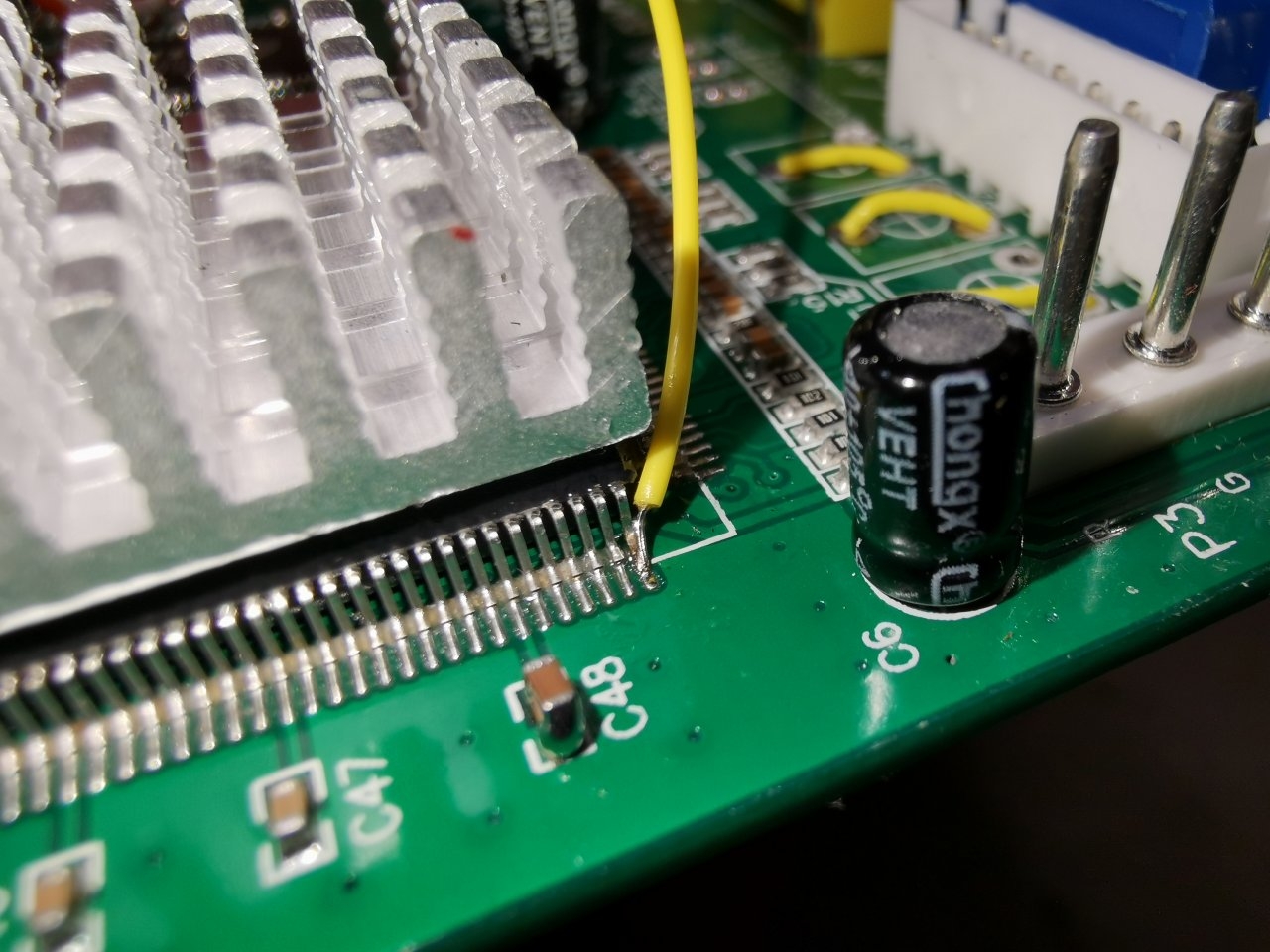 The clock pin.. Be careful here.. Do what I did and just tag it on at an angle. You'll not want to get solder blobs on this chip. it's too dense for easy clean-up. Flux is king, flux will save you. 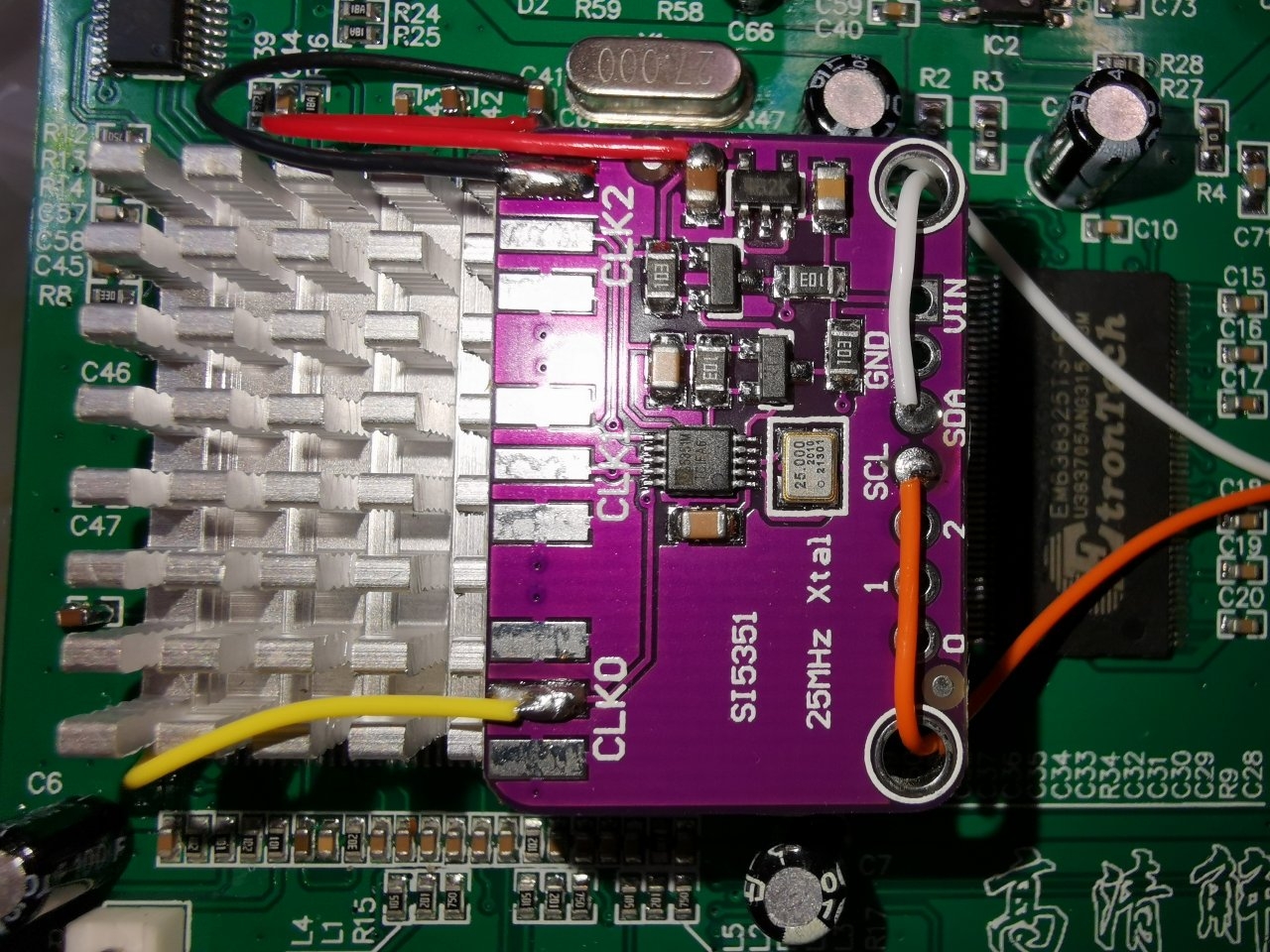 Now just like you'll see in a lot of youtube mods of the GBS-8200, this is probably the best place to fit the clock PCB. Foam pads, hot glue.. that kinda thing just to stick it down. Once it's firmly attached tag tails on as shown. 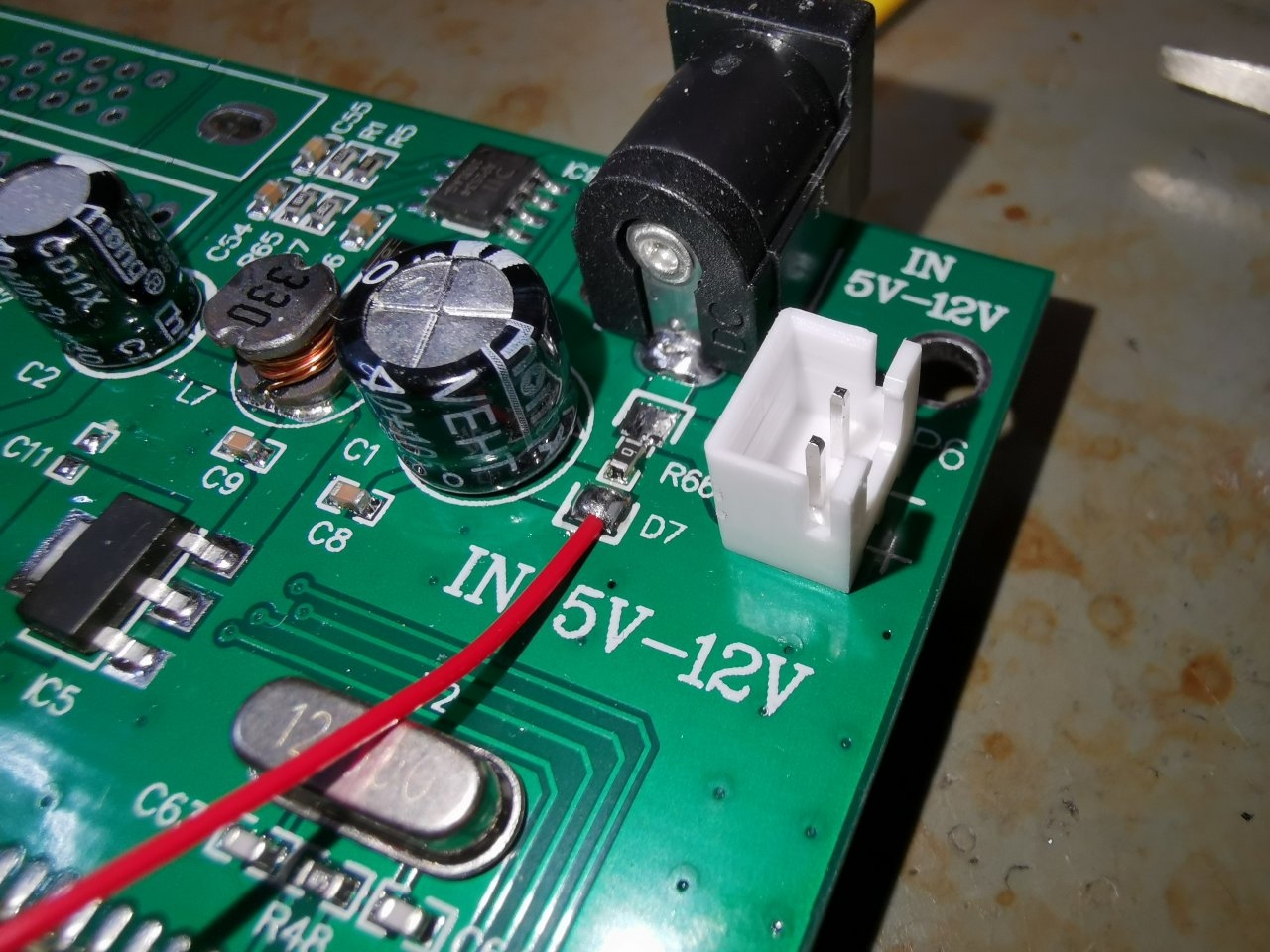 We must be half way done right? Now it's time for the ESP8266. **Program it before you install it** First up, get power from the lower side of the missing protection diode. **Special note: YOU MUST use a 5v PSU. The PCB can take 12v, but the mods can't! 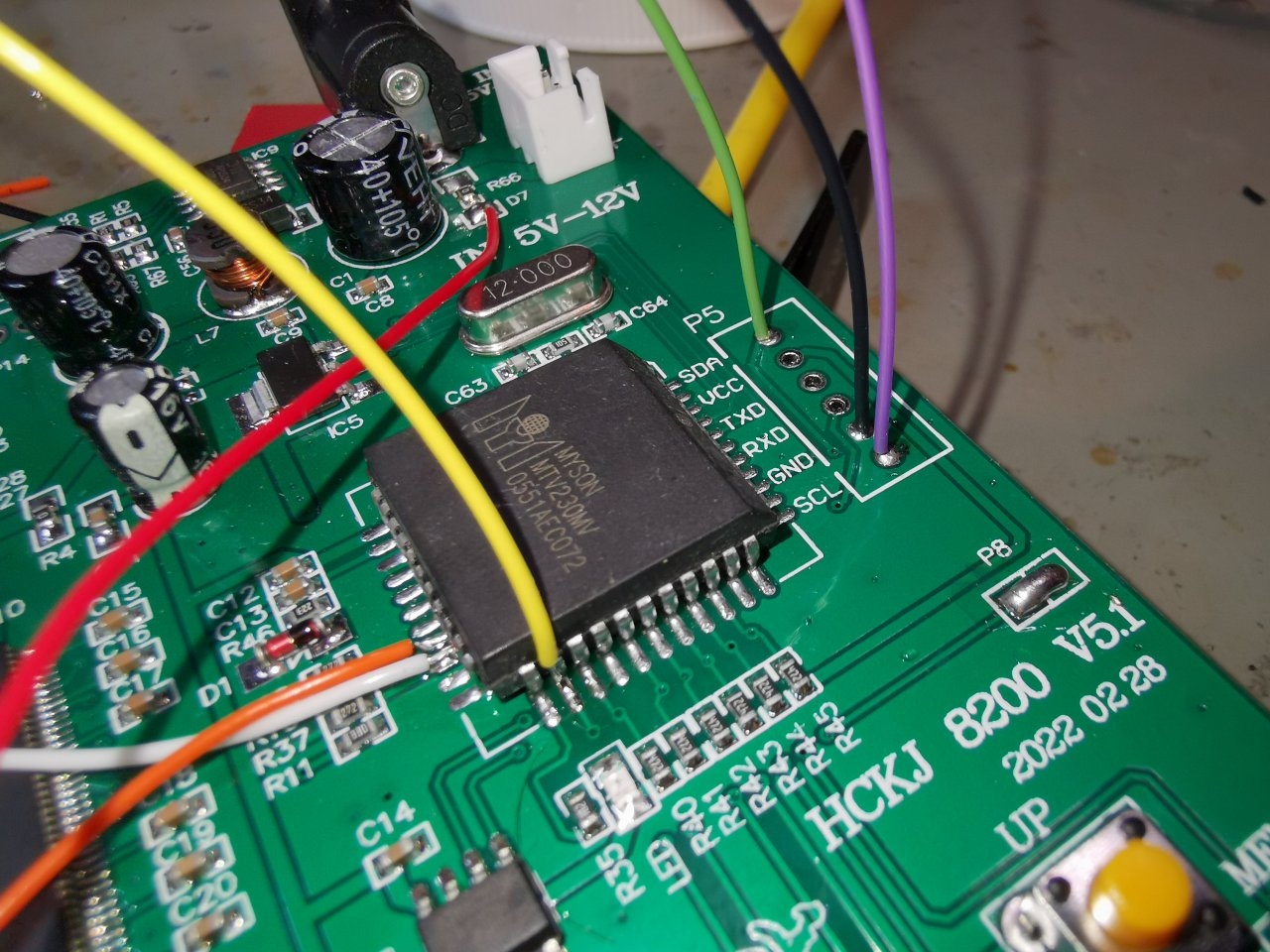 Now solder some tails to P5 (SDA, SCL & GND).. and carefully tag the 2nd pin from the left of the MTV chip. 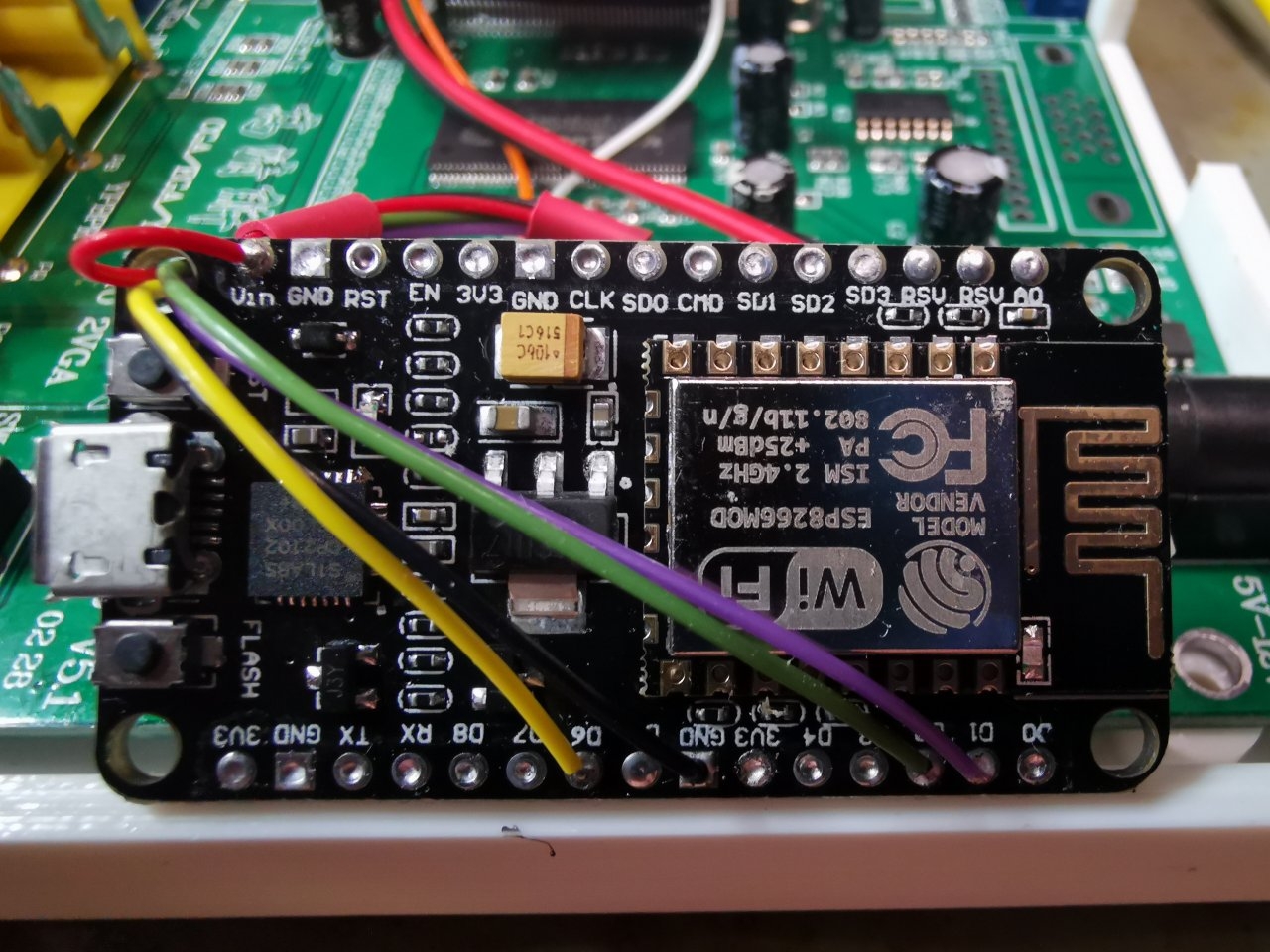 And solder the other end of the tails to the ESP8266 PCB. 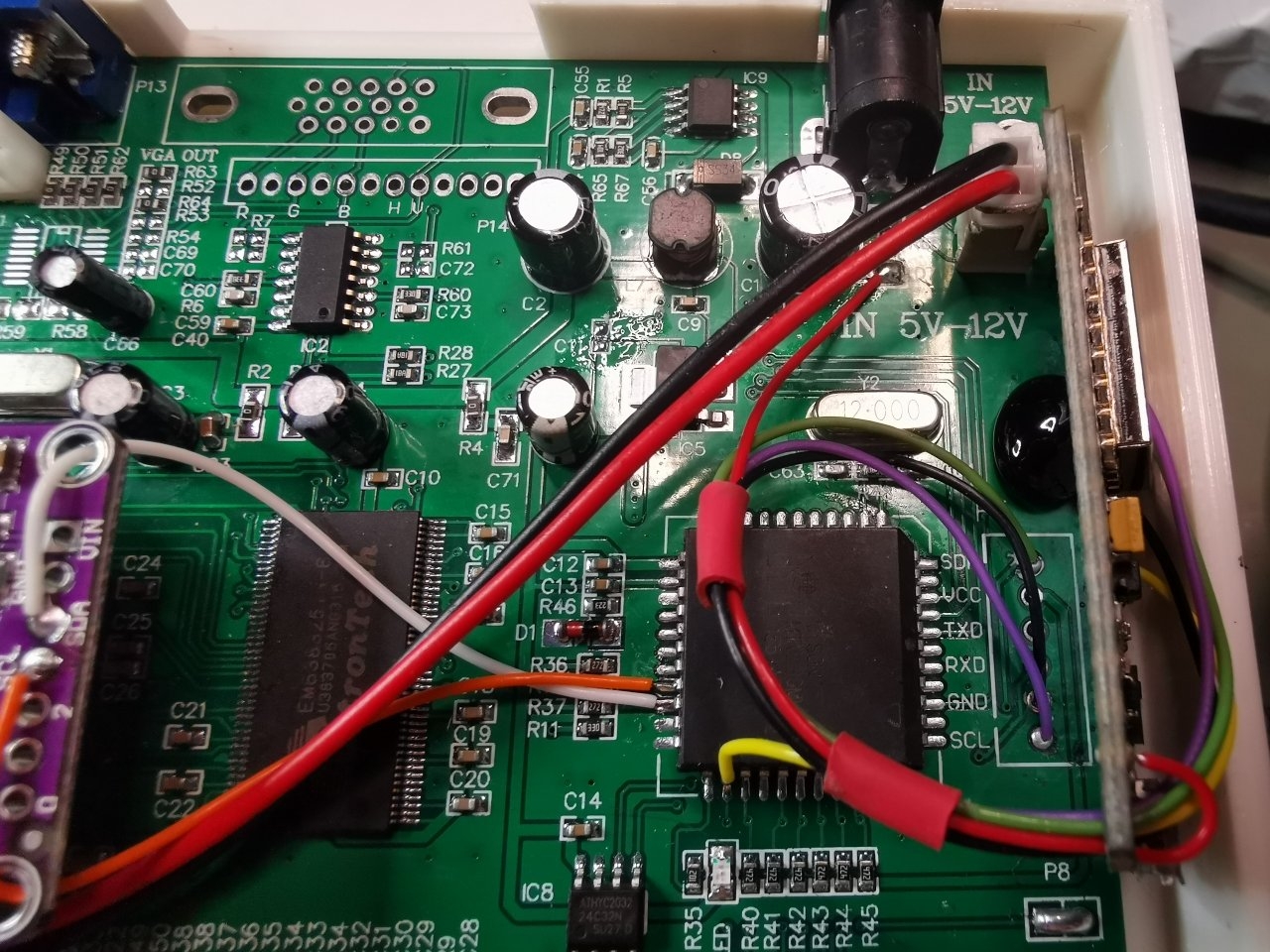 And here it is, all connected up and squeezed into the corner of my box. #Mrs 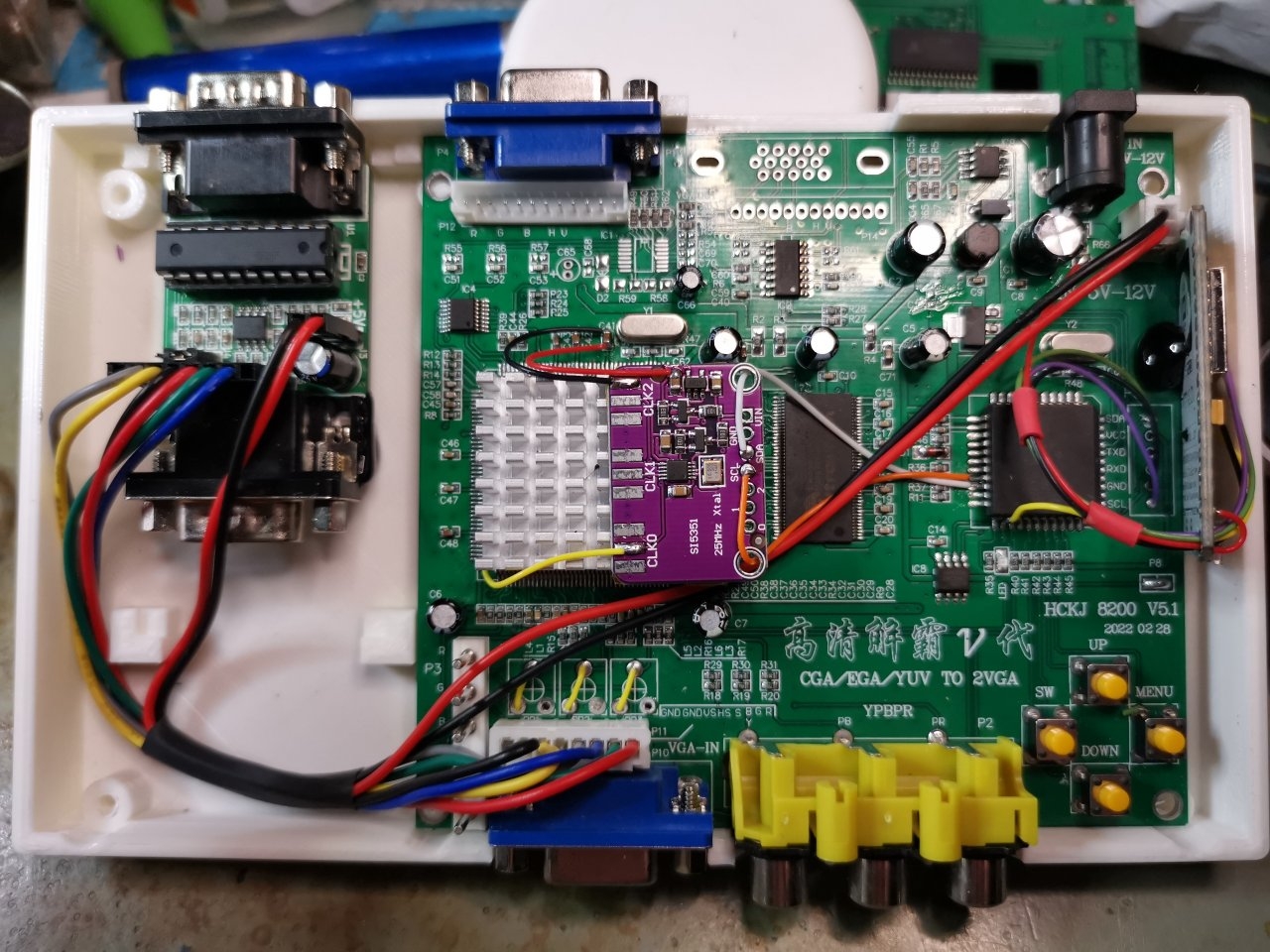 Right and that's me done. Obv's you may not need a RGBi converter, but if you do, just copy what I did. Coz it works for me :D 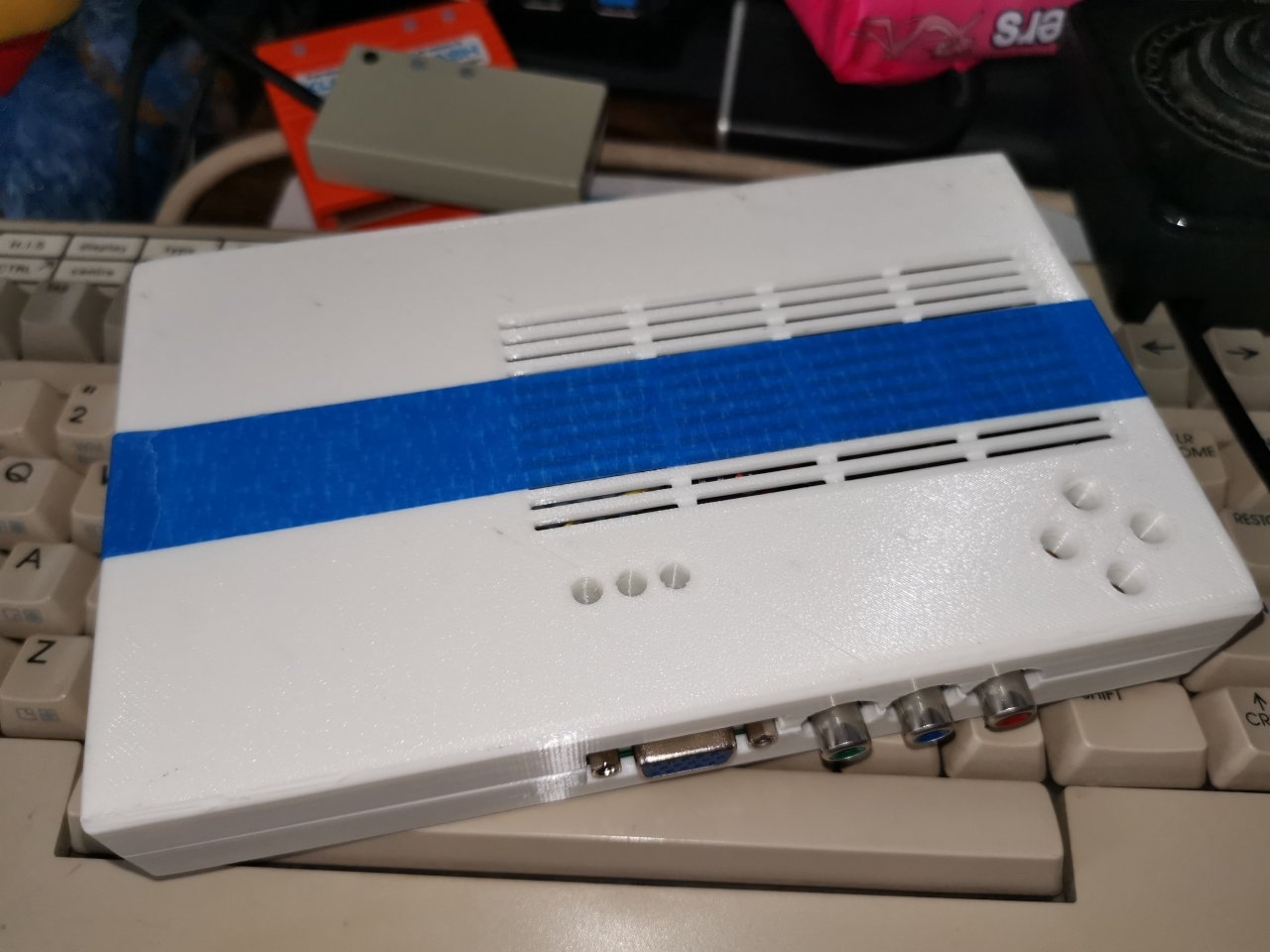